As you have read, ASF has recently been confirmed in the Dominican Republic.  Historically, the ASF virus has been limited to sub‐Saharan countries in Africa. However, in the last two decades, the virus started moving through eastern Europe, Asia, western Europe and now it has made its way to the western hemisphere. This is not the first time the virus has been present on the western hemisphere. Indeed, it has already been in the Americas before, specifically in the Caribbean and in South America. The virus was detected in Cuba in 1971, then in Brazil (April 1978), followed by detections in both the Dominican Republic and Haiti (July1978), and then for the second time in Cuba in 1980. Questions related to how the virus may have entered these countries still remain; however, in those cases infected pork scraps from international flights originating from Europe have been suggested as the likely source of the virus. Fortunately, in all these outbreaks, the virus was eradicated from these countries, and it has not been detected ever again…until July 2021.  (source MSHMP 2021.22.05) 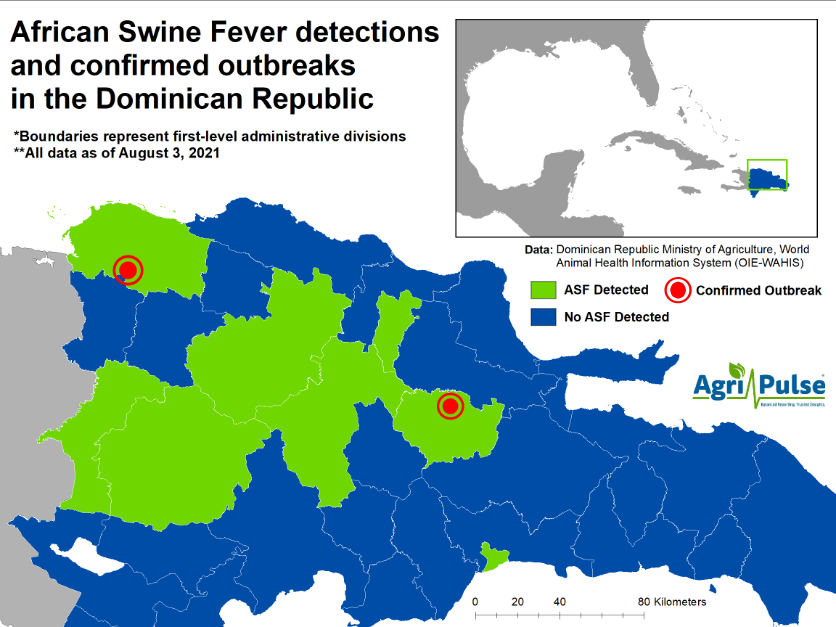 Dr. Harry Snelson, Executive Director of the American Association of Swine Veterinarians, participated in a call with the USDA on the recent African swine fever outbreak in the Dominican Republic. Dr. Jack Shere is heading up the response from the USDA and provided some background and described USDA’s current thoughts and actions. The following are Dr. Snelson’s notes from this call.

The value of regionalization recognition by our trading partners has become an important part of the discussion again as Puerto Rico is a territory of the US.  An introduction there could be recognized as an infection in the US and restrict trading with our global partners.

We will keep you informed as we learn more.