The cost of late mortality is significant in relation to early mortality.

By Aaron J. Lower DVM | Apr 21, 2017
Much of the focus in wean-to-market pig production tends to be on getting weaned pigs placed, started on feed and going. That attention is warranted as we commonly observe early health issues coupled with the stress of getting pigs converted from milk-based to plant-based protein.

In 2006 as veterinary students, Clayton Johnson and I completed a cross-sectional finishing mortality project. After 13,000 miles, 25 finishing sites, and 1,000+ dead pigs (mind you, in the Nebraska summer heat), we had two key take homes: 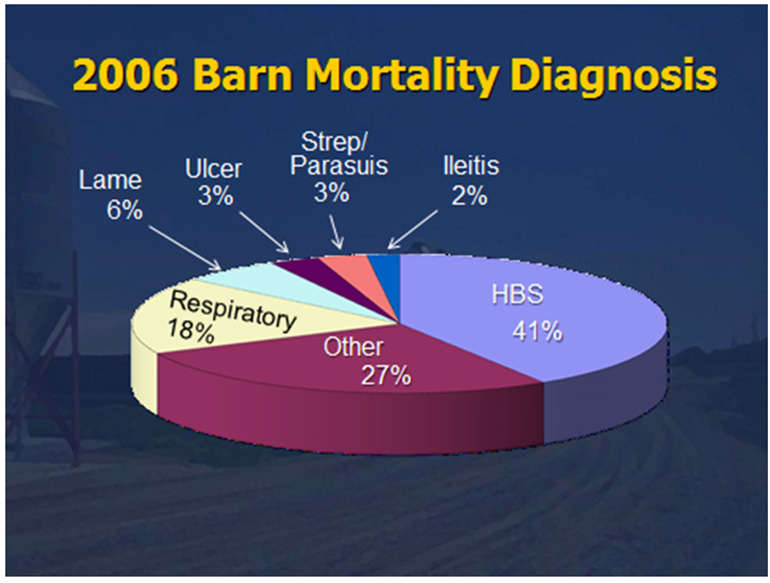 Accurate diagnosis of cause of mortality is difficult without performing a necropsy. Some finishing systems have moved to a simple mortality classification system if necropsies are not common.

With weather turning warm, we will start to see a seasonal increase in mortalities. Many farms underestimate the number of heat-stressed pigs that die over the summer. Heat-stressed pigs can be difficult to diagnose. These pigs will generally present slightly pale with a purple streak on the downside. The pig will generally have some white or bloody froth coming out of the nose. When you necropsy these pigs, all internal organs will be normal. The only abnormalities will be lungs that are very wet and heavy with a dark red to purple color. As you cut through the trachea to pull up the lungs you will generally find a bloody froth in the trachea. If these observations are noted and the weather fits, categorize these mortalities in to heat stress as a reason.

The cost of late mortality is significant in relation to early mortality. Your proper identification of mortality reasons helps with judicious antibiotic usage and understanding facility, ventilation, stocking density, nutrition or genetic changes that need to take place if non-infectious causes of mortality are common.

This article is also available at National Hog Farmer (http://www.nationalhogfarmer.com/animal-health/understanding-late-finishing-mortality)