How to optimize cost of feed per pound of gain?

How to optimize cost of feed per pound of gain?

Oftentimes while summarizing a wean-to-finish closeout report, most producers will center their attention around metrics such as percent Grade A pigs, average daily gain and feed conversion rate. These metrics are very important to a producer’s bottom line; however a finishing production metric that does not get much publicity or attention is the “cost of feed per pound of gain.” 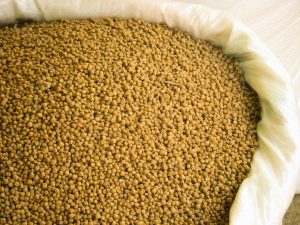 There is a multitude of variables that play a part in each producer’s individual diet cost such as:

When we look at this list of variables, the main influence for a majority of producers is the distance from available key inputs such as corn, soybean meal and dried distillers grains with solubles and the costs of these three inputs. Each producer is different in how they feed pigs, however availability and price of the bulk ingredients play a very influential part in feeding a diet that is well balanced and cost-effective.

As we look across the U.S. pig production system, it is understood that pigs that are fed in the center of corn and soybean production will be the most likely to feed a cheaper diet while being able to feed traditional ingredients such as corn, soybean meal and DDGS. As we move further into the Eastern Corn Belt and East Coast regions, producers will look to other sources of ingredients to help balance their diet while keeping competitive performance metrics. Producers who are able to work closely with a nutritionist have a greater advantage to be able to adjust their diets and push pigs toward the maximum performance while achieving maximum growth and production performance.

In addition to overall diet cost, factors that can help decrease this metric are similar to factors that lower feed conversion rate.